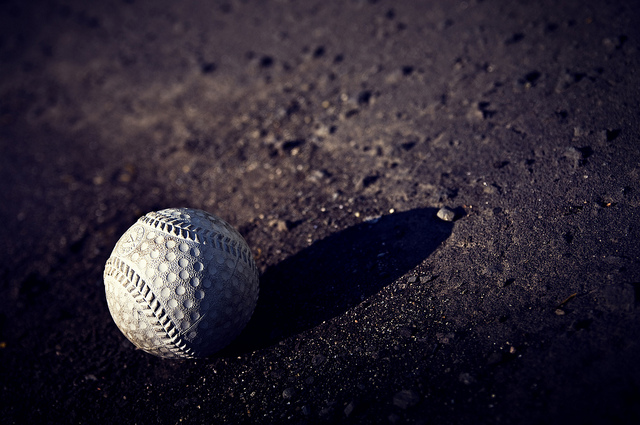 Casey At the Bat (excerpt)

And now the leather-covered sphere came hurtling
through the air,
And Casey stood a-watching it in haughty grandeur
there.
Close by the sturdy batsman the ball unheeded sped—
“That ain’t my style,” said Casey. “Strike one!” the
umpire said.

From the benches, black with people, there went up a
muffled roar,
Like the beating of the storm-waves on a stern and
distant shore;
“Kill him! Kill the umpire!” shouted someone on the
stand;
And it’s likely they’d have killed him had not Casey
raised his hand.

With a smile of Christian charity great Casey’s visage
shone;
He stilled the rising tumult; he bade the game go on;
He signaled to the pitcher, and once more the dun
sphere flew;
But Casey still ignored it and the umpire said, “Strike
two!”

“Fraud!” cried the maddened thousands, and echo
answered “Fraud!”
But one scornful look from Casey and the audience
was awed.
They saw his face grow stern and cold, they saw his
muscles strain,
And they knew that Casey wouldn’t let that ball go by
again.

The sneer is gone from Casey’s lip, his teeth are
clenched in hate,
He pounds with cruel violence his bat upon the plate;
And now the pitcher holds the ball, and now he lets
it go,
And now the air is shattered by the force of Casey’s
blow.

Oh, somewhere in this favoured land the sun is shining
bright,
The band is playing somewhere, and somewhere
hearts are light;
And somewhere men are laughing, and somewhere
children shout,
But there is no joy in Mudville—mighty Casey has
struck out.

— Ernest Lawrence Thayer, from Casey At the Bat

“The poem is launched with bright, bold illustrations that milk all the humor from the situation…Fresh and funny, this rendition should attract a whole new audience to the poem.” —Booklist

One thought on “Casey At the Bat (excerpt)”