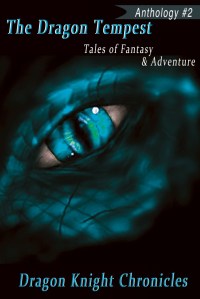 The Dragon Tempest offers a collection of short stories in a variety of fantasy genres, including dark, light, adventure, and epic. Creatures from all worlds abound: dragons, angels, centaurs, witches, gods and goddesses, and those lurking below the water’s surface. Whether you’re moved by tales of battle and bloodshed, suspense, humor, or enlightenment, The Dragon Tempest will leave you craving more from each author. Such a diversity of great fantasy tales to enjoy will leave no room for disappointment.

Randall Lemon, one of our 2nd place winners, has an impressive list of previously published works. Read on to learn more:

Randall took a sabbatical from writing and that period of rest lasted almost three decades.  At one time Randall was a regular fixture of the role playing community.  He was one of the top ranked players from the inception to the end of the RPGA ranking system.  He also served as a high ranking tournament judge, marshal and coordinator of various events at Gen Con and other gaming conventions.  During that time, he was a frequent contributor to Polyhedron magazine perhaps best remembered for the creation of one of the most beloved establishments in the Living City, “Embrol Sludge’s Eatery and Seashell Shoppe.”  Along with a co-author he created the adventure known as “Eye of the Leviathan.” Randall also wrote articles for Video Review Magazine and the Quarterly Journal of Speech.

Hailing from Northwest Indiana just across the line from Chicago, Randall graduated from Purdue University with a Bachelor’s degree.  While at Purdue he was a winner of the prestigious Purdue Literary Awards contest.  He then received his Master’s degree from the University of Southern California and did some work toward the PhD at the University of Illinois.  He taught high school for thirty-four years, has two children and a wife, all of whom he loves dearly.

Now Randall has returned to writing.  This time he is concentrating on flash fiction and short stories.  “The Treasure of Freedom” is Randall’s first endeavor with A Good Tale and he looks forward to many more.  Recent publications by Randall include the round-robin novel, Gryffon Master:  Curse of the Lich King, the story, “A Mouser, a Keg of Rum and a Gunnery Mate” in the Anthology, World of Pirates and Randall’s story, “Mercy Killing” in an anthology called Lava Storm:  In the Neighborhood.  He also has two stories each in the anthologies, Dangerous Days and Aspiring Writers 2013.

Randall will have some of his short fiction showcased in a number of anthologies scheduled to come out in 2014 or 2015 and is currently working on a solo attempt at a fantasy novel.

Gryffon Master:  Curse of the Lich King,  “Acceptable Losses” in Final Ships, “After-Life” in Visions: Leaving Earth, “Flames of Red Make Violet Blue” in Violet Hopes, “Gathering Flowers in the Garden of Fermey” in Dance Like a Monkey, “Hat Trick” and “Victory or Death?” in Aspiring Writers 2013 Winners Anthology, “Heavy Hangs the Head…” and “Taking Liberties” in Dangerous Days, “White Demons,” “Knock-Knock: Who’s There?” “A Less-Than-Perfect Date” and “One Cannot Lose a Mother’s Love” in Aspiring Writers 2014 Winners Anthology, “Mercy Killing” in Lava Storm, “A Mouser, a Keg of Rum, and a Gunnery Mate” in World of Pirates, “A Lighter Philosophy” in One-Minute Stories from Around the World, “Someone Told Me, It’s All Happening…” in Of Past and Future, “The Treasure of Freedom” in Trash to Treasure, “Bobby Darwin’s Lucky Day” in online emagazine “The News in Books” June, 2014 issue pgs 12 – 15.

Randall Lemon on Amazon.com for “books” and “Kindle ebooks”

for Dance Like a Monkey from Silence in the Library.

The Tears of Regas

“Perhaps it is time for me to endow one of the creatures on the material plane with the spark of divinity,” he finally spoke aloud.  “Most of the other gods I know have christened at least one deity.  How could any of them object to my doing so?”

Regas began to search the mortal realm.  He looked for a mortal female who enjoyed solitude.  He kept his divine ears opened to the prayers that flowed in continually.  When he found a likely supplicant, he would cast his far-seeing eye upon her to determine her worthiness for the boon he intended to grant her.  It wasn’t easy.  He looked for the perfect choice, rejecting one after another for not being pristine enough, or for lacking the proper dignity or concentration.  Finally he heard a prayer that showed great promise.

The woman who uttered it was a holy hermit among her people, one who many believed had been granted the gift of foresight.  She was both beautiful and serious and had no need to be surrounded by others of her race.

“This one would make a perfect companion for me.  Once I have raised her to godhood, I could grant her a sliver of my responsibilities.  I know; I could make her the patron of hermits.  That would not take too much of her attention and I could discourse with her for hour upon hour.  Just like I did with…just like I did with…?”

Regas suddenly realized he could no longer remember the name of the goddess who had elevated him to the heavens.  “Truly, the powers of Hemris are great, for he gets both men and gods to forget the vanquished!”