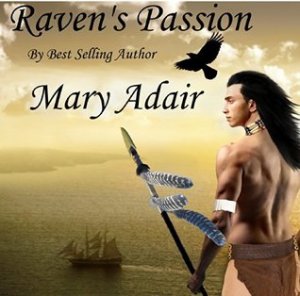 Raven’s Passion is a Young Adult coming of age story. It is about a young warrior of interracial descent and his struggle to accept his heritage as well as to be accepted.

Raven Who Flies To Meet The Clouds:
Raven, is strong, without fear and respected for his prowess as a young warrior. He is also battling his anger with a father he does not know. A white man who would love and then leave a young Cherokee woman to raise his child alone. The villagers see this pent up anger take control of his reactions each time he perceives a threat toward his near-sister, Golden Dawn. The village is unsure and concerned by his aggressiveness and inability to control his anger when Dawn is threatened. Now Raven’s adopted father, Red Panther, is missing and possibly dead. Raven must prove to Chief Dancing Cloud as well as the rest of the village that he possesses the love and selflessness that a warrior, a protector of The People, must possess as he leaves with the war party to find Red Panther.

Golden Dawn:
Golden Dawn is Red Panther’s, a white man, and New Moon’s daughter. She has inherited her father’s fair coloring, his pride and his determination. From her mother she is blessed with strength, courage, a warrior’s abilities, and a gift of visions. She alone understands Raven’s pain. She alone knows their paths are intertwined. She alone knows that someday, she will no longer be his near-sister and because of the love she has for him she will willing pay the price to save his life.

Raven’s Passion
The story of a young warrior struggling with the meaning of life, a life filled with the passion of a time when one’s existence depended on unity, love, selflessness, and the village.

Book 2 in author, Mary Adair’s Passion Series, concentrates mainly on Raven and Golden Dawn. Both are strong, independent characters who are going through the pains of growing-up and proving themselves.

The plot takes the reader through danger and suspenseful twists and turns. The reader learns exactly what it means to be a warrior. There is much laughter, love, and family closeness in the story, too.

I loved Raven’s Passion as well as I loved Passion’s Vision, the first book in the Passion Series. Both books are as historically correct as the author can make them.

I highly recommend Raven’s Passion to readers, young and old alike, who enjoy a good suspenseful read that is rich in history.

I received a PDF copy from Story Cartel, in exchange for an honest review.