For Ancestor #17, I’m going to skip back over to my paternal grandfather’s, (John Preston Beam), mother, Della Francis Taylor, and talk a bit on the Taylor side of the family. The Taylor’s have proven to be a difficult line to trace, for me.

On September 17, 1911, Della Francis Taylor married James Henry Beam in Marshall County, Alabama. The couple had eight children; 5 boys and 3 girls. Two of the boys were a set of twins, with one of them living only three days.

Della passed away on June 13, 1943 at the age of 51. James (Jim) Henry Beam and Della Francis Taylor Beam are both buried in Mt. Pleasant Cemetery in Grove Oak, Alabama. 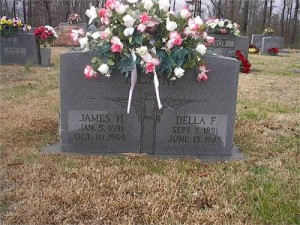